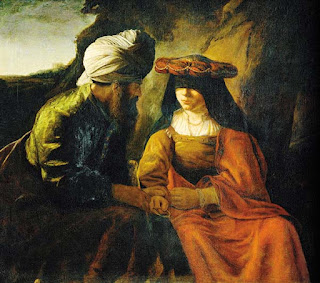 Finding the once-and-for-all, undisputed, incontrovertible meaning for the bible is, in most cases, a fool's errand. And trying to do so requires logical leaps that I'm not comfortable making.

So as we move closer toward looking at the texts in the bible that address homosexuality, we first need to look at how we'll approach scripture as we do so. What you'll see below is just one approach to scripture. It's the one that'll be used going forward in this discussion, but it's far from being the only approach.

I believe the bible is both an historical and a supernaturally inspired document that has been collected over millennia, canonized, translated, and interpreted to give us the document that most of us read (or don't).

Yup. I really think that God inspired scripture. I don't know exactly how or why, but I do think that within the bible we have the attempt of the creator of the universe to communicate with human beings for the purpose of bringing human beings into a better relationship with that creator.

The bible wasn't written in one sitting, but over the course of hundreds or thousands of years (depending on how you date things). It was written in Hebrew, Aramaic, and Greek. It was written as poetry, history, law, music, oracle, letter, biography, parable, wisdom, and a special genre known as apocalyptic. Many of the books of the bible combine several genres, in fact.

Each of the books was written to a specific group of people in a specific historical context. And it is impossible to disambiguate that context from the meaning of the text. As Osburn wrote (Women in the Church, pg. 104):

The "meaning" of a text is the meaning intended by the author within a particular literary and historical setting.

The 66 books of the bible that we have today (or more for the Catholics) weren't handed down from Mount Sinai etched in stone (and bound with leather). Instead the individual books all circulated for some time before they were collected together and then those collections circulated for more time before church leaders voted to canonize (i.e. make official) the books that were in and out of the bible.

I have a high degree of faith in the collection and canonization process because it happened over such a long period of time, with so many disparate belief systems, and the people involved had so much agreement throughout the process. There's far more study that you could do on this topic, but one example is that the entire New Testament was duplicated in quotes in the writings of the early church fathers (important figures in the church in the centuries prior to the canonization of scripture).

So now that you know how I view scripture, I'll tell you a few things about what that means in regards to approaching it.

That there are controversial texts in the bible is without question. In our approach to those controversies, we will do our best to employ an historical-critical reading of the text.

Professor Willard Swartley (Slavery, Sabbath, War & Women: Case Issues in Biblical Interpretation) suggests that the chances of finding the meaning of a controversial text can increase when:

1.  The historical and cultural contexts of specific texts are considered seriously.
2.  Diversity within Scripture is acknowledged, thus leading to a recognition that intra-canonical dialogue must be heard and assessed.
3.  The basic moral and theological principles of the entire Scripture are given priority over statements which stand in tension with these principles or with other specific texts on the subject.

Swartley also offers some tips on missing the meaning of controversial texts.


1.  Numerous texts, occurring from here and there, are strung together with disregard for their cultural and historical particularity.
2.  The interpreter assumes a "flat view" of biblical authority in which all texts, regardless of their original context, must be harmonized into one, rational, propositional truth.
3.  Specific texts are used legalistically.

I hope I don't need to say that we're going to aim for the former instead of the latter.

The following guidelines come from David Scholer's article in Evangelical Quarterly (1988) entitled "Issues in Biblical Interpretation." The basic idea is to look at the commands and examples in the bible and to see how likely they are to be either universal or culturally specific.

How do you think people from a different culture might misunderstand what you've said?

How would you apply the above principles knowing what you know now?

Do you disagree with these ideas? If so, why?

Read the next post here.
Posted by James T Wood at 8:00 AM