What Gay Marriage has to do with Women in the Church 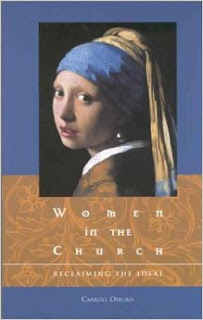 Way back in 2001 Carroll Osburn wrote a book about the issues surrounding women in the bible, He took a measured and thoughtful approach looking at scholarship on both sides of the issue in an attempt to allow Christians to come to their own measured, thoughtful conclusions.

Women in the Church

continues to be one of the books that has most affected me and my view of scripture, not for the conclusions it draws, but for the care with which it not only treats the arguments, but those making the arguments.

I began thinking about this book -- nearly fifteen years later -- because of the striking similarities between the arguments going on in the church now over gay marriage and the arguments that have gone on (and still do) over the roles of women.

One of the most important points is that there are just a handful of passages in the bible dealing with these issues. For each topic there are roughly six passages (it depends on which ones you want to count) that address the issue. Contrast that with topics like love or prayer which have hundreds of passages and you get the idea.

That's not to say that a dearth of passages make something invalid, but it does require some special treatment of the text to ensure that the true message is coming through. And it requires some special grace with interpreters because it is nearly impossible to come up with an unassailable interpretation on any side of the issue.

How to Interpret the Bible

I don't think I'm going to be able to cover all of biblical interpretation in one section of one blog post. What I want to do, however, is to point out some interpretive methods that don't help and suggest some that do.

Stuck in the Middle

So where can we stand when we interpret the bible? How can we have confidence in scripture if it's not literal and how can we dismiss parts of it if it isn't all figurative?

I believe that the bible is both an historical document and an inspired document. I don't think that its historicity diminishes the inspiration nor that its inspiration obviates its historicity. Simply, the bible was God's message to the specific historical audience that received it. For me to interpret it well, I must understand what it originally meant before I take the step of figuring out what it means today.

I'm one of those in-the-middle people. And I think most people are. But the majority of the public conversation is from the loud margins. We have literalist and figurativeists shouting at each other so loudly that it's difficult to hear anything.

I've done a lot of study on this topic and I'm still not sure exactly where I land. I will do my best to put you in the same position (in the good way). There are compelling arguments on both sides of the issue and there are some lame arguments that don't hold much water. My hope is to weed through the various arguments and provide you with some fodder for coming to your own conclusions.

So as we start this journey, what questions do you have? What would you like to see? What are you afraid of?

Oh, and before the commenting gets started in earnest you might want to review this.

Read the next post in this series here.
Posted by James T Wood at 10:09 AM