Whose Job is it to Condemn Sin? 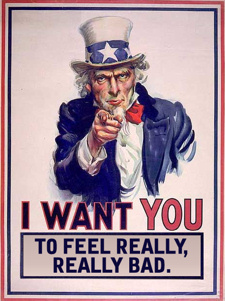 In the last post I looked at sin as being unloving. One of the consequences that I mentioned about that was shame. In Eden the first consequence of sin is the feeling of shame (Gen. 3). Adam and Eve were ashamed of their bodies and ashamed to be in the presence of God, even though they were made by God in his image.

The bible shows several responses to sin. Some are healthy, some are harmful. Unfortunately, I think the church often tends to highlight the harmful responses to sin rather than the healthy ones.

One of the foremost researchers on shame, Brene Brown, says:

I define shame as the intensely painful feeling or experience of believing that we are flawed and therefore unworthy of love and belonging – something we’ve experienced, done, or failed to do makes us unworthy of connection.


I believe that guilt is adaptive and helpful – it’s holding something we’ve done or failed to do up against our values and feeling psychological discomfort.

Guilt allows us to hold our values and our worth intact and self-critique our actions based on those things. If I feel guilty it's because I know that I'm better than my actions show. I feel guilt because I'm worthy of love and belonging and I didn't act like it.

The Apostle Paul showed guilt when he, despite having murdered Christians, lead the church to share the good news with the world. He was not defined by his actions, but by his worthiness for love and belonging. That worthiness drove him to change and grow into one of the greatest evangelists in history.

While both shame and guilt are emotions that we feel ourselves, conviction comes from an external source. In the bible prophets were often the tools of conviction. They would hold up a mirror to the actions of the people for the purpose of evoking a guilt response.

When the prophet Nathan confronted King David, the king was convicted saying "I have sinned against the Lord!" (2 Sam. 12:13). The conviction of sin did not drive David away from God. It did not cause him to think himself unworthy of love and belonging. Instead, it drove him back to God in prayer to wrestle with how he did something that he knew to be wrong.

John Calvin and the Holy Spirit

I think it's fair to say that most of the time we don't have a healthy response to sin. Most of the time being convicted of sin is shame-inducing rather than guilt-inducing. And we owe that, in no small part, to John Calvin.

Without getting too far off-track, Calvin was a proponent of a doctrine called predestination. He liked it, in part, because it emphasizes the sovereignty of God. His ideas about predestination came to be called Calvinism after him.

The basic idea is that God predestined everyone, before he made the world, for either heaven or hell.* Which sort of obviates the need for converting people since God has already done all the work. So as the belief of Calvinism spread, people wanted to find ways to prove that they were predestined for heaven instead of hell. During a period called the Great Awakening one of the methods for that determination (in the minds of the people) developed.

The people would all get together for a church service or tent revival and they would wait for the Holy Spirit to show up and convict people. They reasoned that since the Holy Spirit could only dwell within the saved, that if they felt the Spirit then they must be saved, so they would know that they were predestined for heaven.

To this end, preachers would craft their sermons to evoke the strongest emotional response they could and one of the most famous examples of that is Jonathan Edward's sermon, "Sinners in the Hands of an Angry God." In which he says:

The God that holds you over the Pit of Hell, much as one holds a Spider, or some loathsome Insect, over the Fire, abhors you, and is dreadfully provoked; his Wrath towards you burns like Fire; he looks upon you as worthy of nothing else, but to be cast into the Fire; he is of purer Eyes than to bear to have you in his Sight; you are ten thousand Times so abominable in his Eyes as the most hateful venomous Serpent is in ours. You have offended him infinitely more than ever a stubborn Rebel did his Prince: and yet ‘tis nothing but his Hand that holds you from falling into the Fire every Moment: 'Tis to be ascribed to nothing else, that you did not go to Hell the last Night; that you was suffer’d to awake again in this World, after you closed your Eyes to sleep: and there is no other Reason to be given why you have not dropped into Hell since you arose in the Morning, but that God’s Hand has held you up: There is no other reason to be given why you han’t gone to Hell since you have sat here in the House of God, provoking his pure Eyes by your sinful wicked Manner of attending his solemn Worship: Yea, there is nothing else that is to be given as a Reason why you don’t this very Moment drop down into Hell.

Those words helped to launch the Great Awakening in the North America. That sermon was so well regarded that it was preached and re-preached throughout the world, not just by Edwards but by countless other preachers. Those that did not preach Edwards' exact sermon often duplicated the effect through their own genre of preaching that we now call hellfire-and-brimstone.

Even reading the words of "Sinners in the Hands of an Angry God" to post here is bringing tears to my eyes and causing the bile to rise in my throat. I kept looking for a place to stop the quote, but the thought just kept going. Shame. Utter and complete shame. It sickens me that the shaming of humanity was portrayed as being from God. What's even worse is that nearly all of American Christianity was affected by that idea.

Jesus taught that the one who would convict the world of sin is the Holy Spirit (John 16:8). That is, the Holy Spirit will evoke a guilt response in people who are worthy, beloved, holy people and do things that are not in line with their worth.

The first message, the core message of the whole bible, is that we are to love God, love each other, and love ourselves. If we don't love ourselves -- consider ourselves to be worthy of love and belonging -- then we can't love others or God. When we see ourselves as flawed, broken, evil people that are unworthy of love, we have no reason to think that anyone else is worthy of love.

Then when we see people who aren't following the rules we think they ought to we take it upon ourselves to condemn them, to shame them the way that we've been shamed. In some ways I think the response is similar to an abused child growing up to abuse their children. We're deeply wounded, shamed people who have been so removed from what true love looks like that we actually think we're being loving when we condemn others to hell. For, if the fear of hell convinced us to stop sinning, then perhaps it will do the same for others.

Whether or not the bible says that homosexuality is right or wrong, it clearly and unequivocally says that every person is worthy of love and belonging. We are to love ourselves as God's image-bearers and we are to love others as his precious children. Love, belonging and worth don't excuse sin, but rather help us to use a guilt-response to align our actions with our values rather than a shame response to align our values with our actions.

I don't know who is reading this blog, but I want to apologize to anyone who has been made to feel shameful because of Christianity. As a pastor it is, in part, my responsibility to convict the church of this. I'm sorry that I haven't done it sooner. I'm sorry that I haven't done it more vocally. I'm sorry that the bible, which its core message is love, has been used to speak hate into your life. You are worthy. You are beloved. You belong. And I will work to make the church a place where that is true once again.

How have you experienced the difference between guilt and shame?

How would your life be different if you were convinced that you're worthy of love and belonging?

*Note: I don't believe Calvinism, but it's important to understand from an historical perspective.
Posted by James T Wood at 12:15 PM